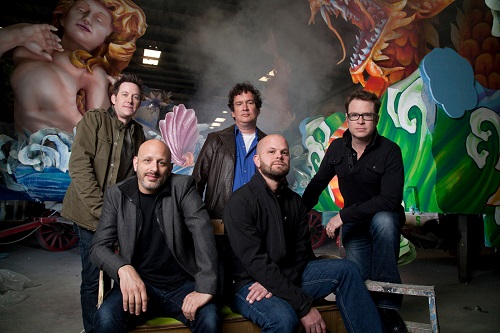 Just three weeks have passed since the release of Carnivale Electricos, Galactic’s latest studio album, and there is no doubt they will be bringing the funk and enthusiasm from its release to the Crown Room of the Crystal Bay Club. The CBC’s favored “Best Show of the Year” on March 16 will bring in the band members, who are still running off of the vibes from their favorite time of year: Mardi Gras.

At 8pm the guys will storm into the Crystal Bay, bringing their high energy and unmatched enthusiasm. Twenty five year old Maggie Koerner accompanies with her outstanding vocals for her first debut in Tahoe. Also to join Galactic is Brushy One String, an exceptionally talented guitarist bringing a Jamaican twist to a one string guitar.

Galactic newest album, Carnivale Electricos, makes perfect sense as the band first got together in New Orleans, the American city for a Mardi Gras party, eighteen long years ago. It would seem appropriate then that their latest music is the labor of love born from those years in Louisiana. Carnivale Electricos shares sounds and stirs up sensations of being at the party city, though the band claim the new album is much more than a party album. The album instead takes listeners on a journey through the entire experience of Mardi Gras, beginning with a spiritual sense, much like the holiday does for the black community in New Orleans.

The Music of Mardi Gras

Galactic incorporated a high school marching band of 40 students to demo the track “Karate”, which gave the students a boost of confidence in being involved in the powerful number. Band member Ben Ellman was going for the sensation of having a marching band play past a crowded street, a sure fire experience in the streets of New Orleans during the celebration. By contrast the final song on the album “Ash Wednesday Sunrise” portrays the feelings of tiredness and exhaustion after the party, the gratitude to have attended, yet the conscious return to daily living.

Working with the kids is a prime example of the seasoned musicians’ within Galactic’s style. The band that can boast nearly two decades of playing together has many big names and collaborations on their records. But they still support the underground. Playing with talent is what matters to Galactic. Many sounds on the new album come directly from the music scene currently unfolding in their hometown.

Morphing Over Space and Time

Galactic’s sounds vary widely due in part to each band member having their own studios, providing space and time for experimenting. When the band comes together to write, they end up creating not just music, but a show. With equal parts mystery, funky joy, laughter, darkness and elated celebration, the music of Galactic, especially on Carnivale Electricos, evokes and honors each one.

Carnivale Electricos is almost a tribute to where the band calls home. It celebrates the time and place where music is a celebration itself. Two friends, Jeff Gaines and Robert Mercurio, started the band when they moved from Maryland to New Orleans and discovered a sound and a scene that shaped their entire lives.

Galactic Prophylactic was the original name for the octet in their inception in 1994, but soon after became the sextet that we know today as Galactic. Over the years the band’s style has morphed and changed, incorporating more hip hop sounds and electronica, but always holding on to their funk and jazz roots.