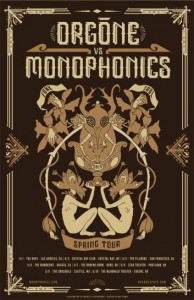 For two funk and soul bands, live performance has turned to war. The second battle of Monophonics versus Orgone will take place on the battlefield of the Crystal Bay Club in Tahoe this Friday. With weapons of saxophones, electric bass guitars, keyboards, drums and microphones, the bands will blast the funk and soul music they’re known for in an attempt to get feet moving and bodies grooving.

For the epic event, the CBC will start the show early and be open late, late late. Audiences can plan for nearly a four-hour set from these heavyweight competitors. Monophonics, a Psychedelic Soul band reining from the heavy funk roots of their hometown San Francisco, will battle Orgone, a deep soul and afro-disco eight member band that is uniquely L.A. in its hard and raw style. The battle between these hot, heavy and dedicated live performers will be a close call for the first three hours of the show. Monophonics and Orgone plan to make peace and come together as a mind blowing last set of creative collaboration. Don’t miss the epic battle between these funk and soul bands, Friday May 2

This concept of the live show war of Monophonics versus Orgone started recently. The competitors’ first stage battle is May 1 in West Hollywood. The battle down south will ignite the heat as the bands travel north, bringing their unique blends of old-school funk and their own new soul sounds along the way. The Second Battle Crystal Bay and the Tahoe audiences are lucky to see the live show of these energetic bands on only their second show together. The bands’ second battle on May 2 in the Crown Room will combine the heat from the first battle with the anticipation of the live performance war the bands will continue fighting throughout the month.  After the CBC, Monophonics and Oregone will be heading to the Fillmore and then jamming their way to Arcata, Bend, Portland and Eugene.

Monophonics’ Journey to the Top

San Francisco was the birth of Psychedelic Soul—a mix of Psychedelic Rock and Soul that was planted along with the flower children of the 1960’s and grew up well into the 1970’s. The Monophonics’ sound comes primarily from this Black Rock style; the band formed in 2005 and has kept up with the times. On the backbone of Austin Bohlman’s funky drums and the bass of Miles O’Mahony, Monophonics have played with the likes of Al Green, Galactic, and Crosby Stills and Nash. Bay Area venues fill up fast with the Monophonics shows—the horn section of Ryan Scott, Nadav Nirenberg and Alex Baky keep audiences hungry for their incredibly high energy shows. Kelly Finnigan’s vocals and organ anchor the sound of the Monophonics, where fans connect with the musicians through excellent songwriting and pumping hypnotizing melodies.

Orgone, the eight-member band that started in Los Angeles just returned home to the recording studio after sweeping music festivals across the country. Orgone’s music isn’t for the faint of foot. Their rare funk and afro-disco sound grooves and shifts without effort. Their music swings from gritty to heavy to funky to soulful with new vocals from Adryon de León. The band’s keyboardist Dan Hastie and guitarist Sergio Rios began honing their craft at a young age, always striving to hit the point they feel they’re now near in their musical careers. Orgone has collaborated with the Roots, Thievery Corporation and Al Green as well. The collaboration with the Monophonics will only help this dynamic sound to further jam their identity.

Be sure to show up early for this knock-out performance from both bands. The coming together of Monophonics and Orgone for the finale will leave audiences with a night to be remembered. The Crown Room opens at 8 p.m. for a show at 9.  This party will keep going as long as the bands battle, musicians jam and fans keep dancing.