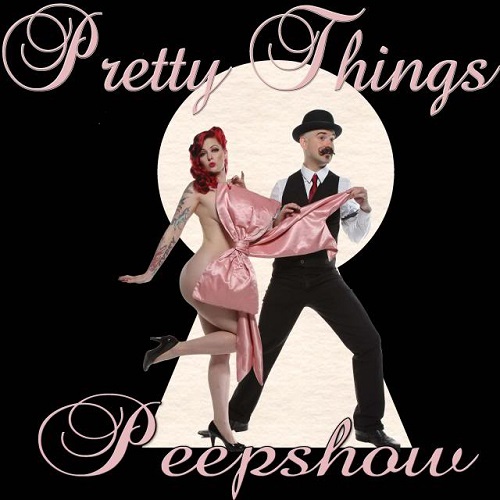 Things are about to get pretty, weird, and pretty weird as Crystal Bay welcomes Pretty Things Peepshow to the Red Room for a night of burlesque and sideshow performance. Since January of 2009 the show has been touring its sexy mix dubbed “Broadville”, paying homage to past forms of entertainment. Started in New York City by Go-Go Amy, the Pretty Things Peepshow is vaudeville at its best.

The seated show on March 14 will reveal, unveil and uncover the favored aspects of burlesque with colorful costumes and mysterious music. The show is like nothing you’ve seen before and recommended for those who consider themselves burners, dancers, performers or lovers of anything vintage. Go Go Amy combines her love for performing and her experience in costume design and has created a fun, flirty and sexy show that keeps audiences on their feet. The seamstress and the “shimmy” professional sleeps in curlers and always finds a way to incorporates sparkles or fringe into her outfits. The only difference between Go Go Amy by night and Amy, the designer, by day? “Just a few fake eyelashes,” she says on her YouTube video.

Mr. Donny V, the Dapper Dan of Danger is the host of the show and the experienced sideshow performer. Donny V spent 6 years with the Coney Island Circus Sideshow and has performed in venues as large as Time Square. His whip cracking, fire eating, and chainsaw juggling are over the top and entertaining and a perfect addition to the cast of Pretty Little Peepshow.

Burlesque dancer and performer extraordinaire Frankie Sin comes from the opposite side of the states as her cohorts. Dubbed “The Bad Girl of Broadway” Frankie calls Hollywood home created her own style of dance. The sultry performer combines shimmies and sultry dances of the past with modern belly dance moves to create a performance the eyes cannot avoid. The pinup model began guest appearing with Pretty Things Pinups in 2010 and is now a regular part of the family.

Brianna Belladonna’s artwork is her performance on the stage as well as the art that covers her body. This tattoo artist nearly bears it all as she swallows jeweled swords. Brianna hold records for her feats and now that she has combined her talents with the rest of the crew at Pretty Pink Things she is more seductive than ever.

After party with The Swankster’s Ball Ft. The Klown w/ Jolligood + The Gentlemen Callers & Friends