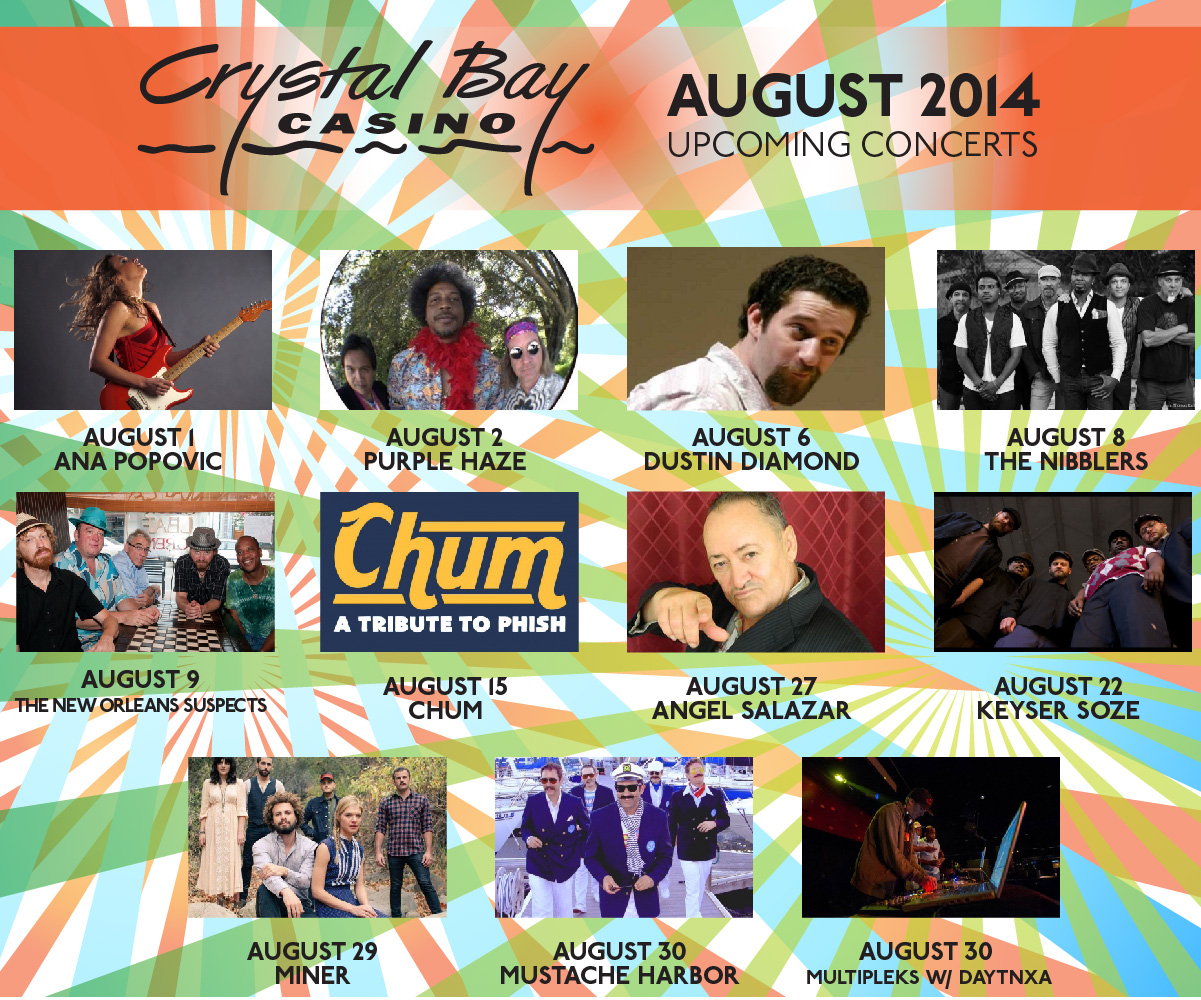 The leaves might be starting to turn, and the pumpkin spice latte may have arrived at Starbucks today, but it’s not fall yet. This week is full of heat. From comedy to vintage rock, see what August concerts and shows are coming to the Crystal Bay Casino this week.

Are you ready to “sheck it out” on Wednesday night in the Crown Room? You better be! Famous for his roles as Chi Chi in Scarface, in Punchline with Tom Hanks and Sally Fields, or as Walberto in Carlito’s Way, we’re in for a great show Angel Salazar takes the stage for his “From Scarface to Carlito’s Way” show. This is a show for mature audiences only, so if you’re 17 years and older, love a good laugh, and are free Wednesday night, then you need to make it down to the Crown Room.

And if one dose of celebrity isn’t enough, get ready for a second. You may know the person taking the stage after Salazar: he’s been on NBC’s America’s Got Talent,” “The Gong Show,” and Comedy Central with Dave Attell and Adam Corolla. It’s none other than magician-comedian Justin Rivera. Be prepared to laugh and be amazed when he takes the stage.

The laughs start Wednesday night at 8:30 p.m. You can buy tickets in advance for $12, and they’ll be $15 the day of the show. You can get your tickets here. Enjoy the show!

Inspired by a trip to Central and South America, husband and wife duo Justin and Kate Miner started Miner as Kickstarter-funded project in a bedroom studio, with their brother Jeremy Miner. Last year, they became a touring band, and expanded their line-up to include even more family and friends:

And we’re proud and excited to finally have the Los Angeles-based band of folk rock taking the stage for a free show Friday night at 10 p.m. on the Crown Room stage. And before the show, be sure to check out their latest album, “Into the Morning,” which came out in February. Head over to their website to listen to a few tracks from the album, including “Carousel” and “ Hey Love.”

Following Miner, the fun doesn’t stop because we’ve got an after party with guitartist Scott Pemberton takes the stage. If you haven’t heard Scott Pemberton before, prepare to be amazed–he’s received comparisons regularly to Jimi Hendrix and James Brown, along with cleverly blending anything from “classic rock, jazz, psychedelia and everything in between,” says Willamette Week on Scott Pemberton’s website.

As always, make sure to snap pictures of the concert, because we always love to see what you experience. Have a great time!

In the Crown Room Saturday night, you can be witness to this when the Northern California band comprised of Steven Goulet, bassist “Doc” Browne, drummer Russ ” Solid” Gold,  guitarist Billy Shen,  vocalists Greg”Maniac” Zema and Dan Kingsford (also acoustic guitarist and frontman) take the stage. You can go ahead and fall in love with what you hear on their Youtube channel (songs such as”I’m All Right” or “Who’s Crying Now) but they don’t compare to hearing them live.

Starting at 11:30 p.m., get ready to keep the Tahoe party going by heading to the Red Room and get ready to dance and “get lost in the music.”. What’s better than partying till the early morning light with Multiplex and Daytxna? The fact that it’s a FREE show. We love a night filled with great music and even better friends, dancing the night away. Don’t miss out.